In the South West of France, perhaps also where you are, there are many once fascinating machines resting in attics.

For here, immobile, are wonderful examples of workmanship that, like a clarinet not played, or a car never driven are worthless when not in operation. 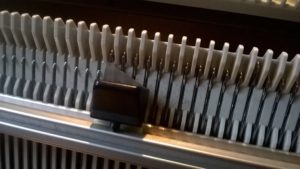 This machinery after thirty or forty years of idleness can still fairly quickly come back to life. The fine metals and machine design are fabulous. Time and again, needles after only a little oil are easing up and down across the beds carrying threads and interweaving them accurately.

So many possibilities and so much wastage of potential objects not made and lost opportunities from being left in an attic. Some knitting machines were semi-industrial manufacturing items, with exquisitely made mechanisms now lost to people in this part of the world, although they were great works of engineering. 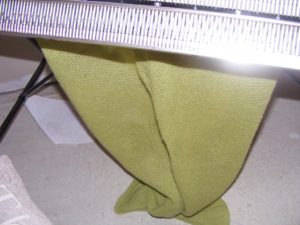 I spoke to a woman in John Lewis in Oxford St who told me in the 1980’s the ground floor was covered with them. Fashion changed or the encouragement to use them died away.

Me, I like machines and clever devices and I wonder at the work and materials that went into making complex mass-produced mechanisms that don’t deteriorate readily and that brought a personal industrial revolution into our living rooms. 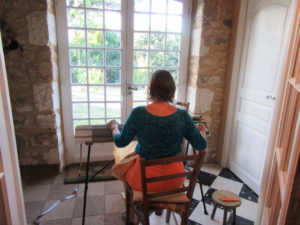 For me, in my childhood I was given toys that could make and do things; Plastercraft for paper weights, an enamelling kiln for jewellery, paints, musical instruments, a bicycle, puppets and even a mini sewing machine.

But even so, I envied my brother’s Lego with wheels and rubber bands and his archery kit and wondered what the china t-set actually did. I didn’t understand what I was supposed to do with a china t-set, what was its purpose, what could it do?

And then as an adult, having almost always worked in workshops I moved to France and was far from any kind; not electronic, woodwork, textiles or anything, not art or pottery. So without tools, I found I was looking for some.

I knew knitting machines were available and that if you have a machine, you can make something.

And my friends I blame for teaching me that Marx said that if you own the means of production you are not the slave of it.

I loved the idea of resurrecting knitting machines in an area of high unemployment and illuminating their worth and liberating the masses. Who doesn’t ?

So during one long winter I wrote a letter to my mother’s French friend who had said one day in passing, that she had a knitting machine in her attic.

Please email me with your choice of colour and size